I wanted to try a CPU that runs at faster clock speeds and has more built-in peripherals than the Z80. More built in peripherals means less external boards needed for mundane features, and more room in the backplane for “interesting boards”.

There are several variants of the Z180. I chose the Z8S180 because it is available in a PLCC package, which means you can mount it using a through-hole PLCC socket. The latest and greatest version offers a few more features than the Z8S180, but is only available in QFP. On-board peripherals of the Z8S180 include:

The Asynchronous Serial Interfaces and Programmable Reload Timer should in theory mean no need for the Z80 CTC or SIO/2 that I tend to use in my other projects. The MMU has the potential to eliminate much circuitry on the banked ROM/RAM board.

Below is the schematic for the Z180 board: 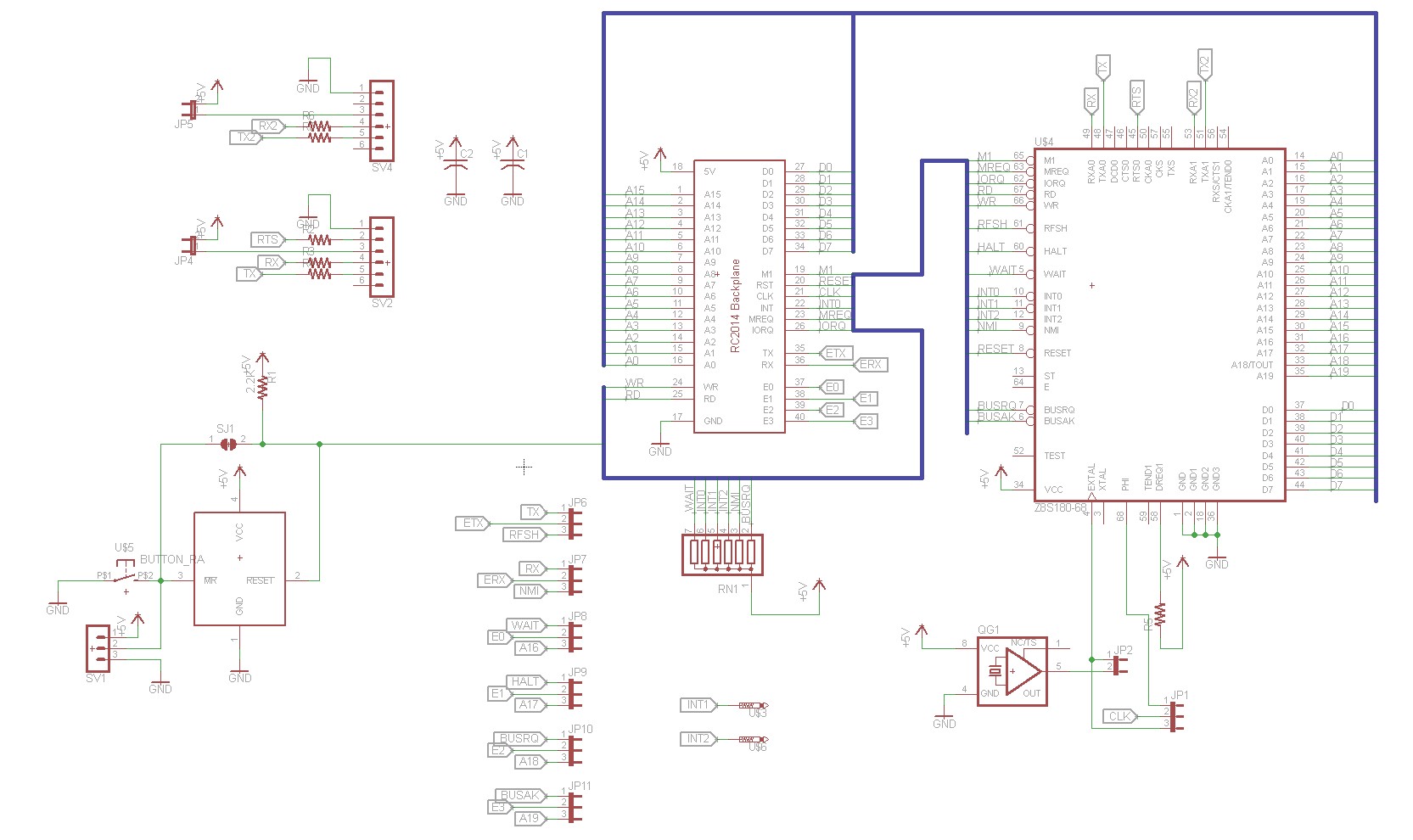 As you can see, the bulk of the schematic is the Z180 CPU and RC2014 backplane connector. We do the obvious thing, and connect all of the address, data, and control lines from CPU to backplane.

It gets a little more interesting where the oscillator is connected. The Z180 has both a clock input (EXTAL) and a clock output (PHI). This allows peripherals to take advantage of the Z180’s software-controllable clock multiplier and divider. I wanted to make sure the board was compatible with external clock boards (like a slow clock, etc) so I made it so the RC2014’s CLK pin could be jumper to either the clock input (EXTAL) or the clock output (PHI). I also put the usual on-board footprint for a crystal oscillator, with a jumper to enable it to be connected to EXTAL. This should pretty much support any type of clocking that one wants to do with an RC2014.

Note that if you intend to use the RC2014 serial boards, either a ACIA or SIO/2, then you’ll have to either run your Z180 at 7.3728 Mhz, or clock the ACIA or SIO/2 boards separately, since they generally derive their baud rate clock from the RC2014 bus. I built a oscillator footprint into my SIO/2 board for exactly that reason.

There’s also a MAX811 power-on reset circuit, and a smd jumper to work around it if you don’t want it. There’s a header for external reset switch and a footprint for onboard reset button.

Because the Z180’s onboard MMU has support for addressing up to 1MB of memory, there are several extra address lines to contend with. I designed this board so that you can select the RC2014’s extra pins between the traditional functions of my other CPU boards (busreq, busack, halt, wait, etc) and the address pins. I’m thinking this will allow me to develop a banked ROM/RAM board that uses the Z180’s MMU instead of its own page selection circuitry.

The serial headers are broken out to FTDI-compatible jumpers.

Below is a picture of the assembled CPU board. 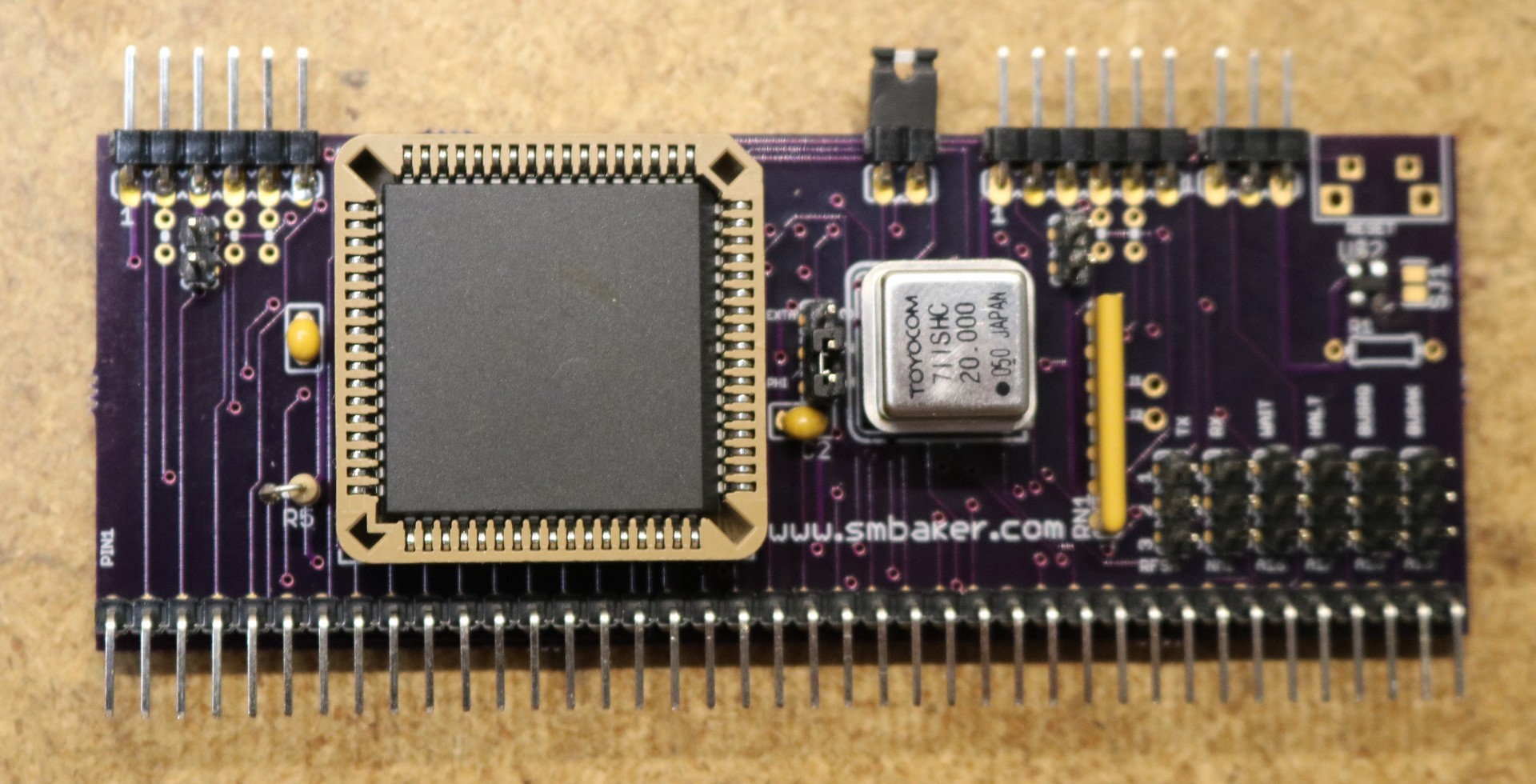 As we can see, I’ve installed a 20 Mhz oscillator (I socketed this oscillator so that it can easily be changed). The jumpers are installed to connect the oscillator to EXTAL and to connect the Z180’s PHI to the RC2014 BUS’s CLK pin. By default, the CPU will boot up with the divide-by-2 clock divider selected, so it runs at 10 Mhz. This divider is then disabled in software and the CPU switches to 20 Mhz. I’ve modified RomWBW to do this.

I have tried out any of the onboard peripherals yet. I’m still using my SIO/2 board for asynchronous IO until I get around into looking into Z180 serial drivers. As mentioned above, this necessitated installing a 7.3728 Mhz crystal in my SIO/2 board, so that the SIO/2 board has the correct reference for baud rate generation.

As usual, I’ve made the board available on Osh Park: