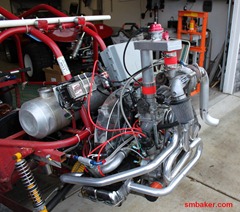 Never happy with leaving something alone, I decided to replace the mazda engine with an aircooled motor, but no ordinary aircooled motor. This one is turbocharged and fuel injected.

The thumbnail to the left is a picture of the completed engine. You can click it to view the full-size image. I completed the project a year or two ago and have taken it to the dunes several times. The engine runs great and was surprisingly not all that complicated to get working. This section of the website will detail the build, with a focus on the fuel-injection related components and work.

Fuel injection will use the popular ‘Megasquirt’ DIY fuel injection controller. The engine is a custom built 1776 with forged CW crank and forged Mahle pistons. Turbo is an IHI RHB5, the same model that I used in the Manx project.

I know many readers were fond of the Mazda conversion, so I thought I’d lay out the reasons for replacing the Mazda rotary engine with an aircooled:

The manx turbo project gave me a lot of experience with turbocharging. One thing that I learned was that draw-through setups are not ideal — you move the carb a long way away from the engine which increases problems with icing, in particular on the very humid oregon coast. There’s also a bit of a dead spot with draw-through setups since the carb is located so far away from the engine and is less responsive to changes. This led me to decide to make the leap to fuel injection.

Thus I started a whole new project — new engine, fuel injection, and turbo — all at the same time. Fortunately I had a friend who’d already done a megasquirt and he was able to give me some pointers.