In this post, I turn a raspberry pi into a virtual storage device for ISA bus computers:

I’m tired of carrying compact flash cards and/or floppies back and forth to my XT computer. I like to do development at my desk using my modern windows PC. While I can certainly use a KVM switch to interact with the retro computer from my Windows desktop, it would be a lot more convenient if I could also have a shared filesystem. There are several alternatives, from serial port solutions, to network adapters. However, I wanted something that would emulate a simple disk device, like a floppy drive, something I could even boot off of, so I implemented a virtual floppy served from a raspberry pi.

Connecting a modern Raspberry Pi to an ancient ISA computer

I wanted to come up with something that had the potential for high performance, so I thought I would try a dual-ported memory design. Dual-ported memory has the advantage that two different users can simultaneously use the memory without interfering with one another. A typical example is video cards where one user is the computer updating the video RAM where another user is the display adapter sending the contents of the video ram out to the display adapter.

Checking digikey, I found that a 1 kilobyte dual ported ram does exist, and it’s even through-hole. The device is the IDT7130. I set out to figure out how to interface the IDT7130 to both the PC’s ISA bus and the raspberry pi.

Below is a schematic: 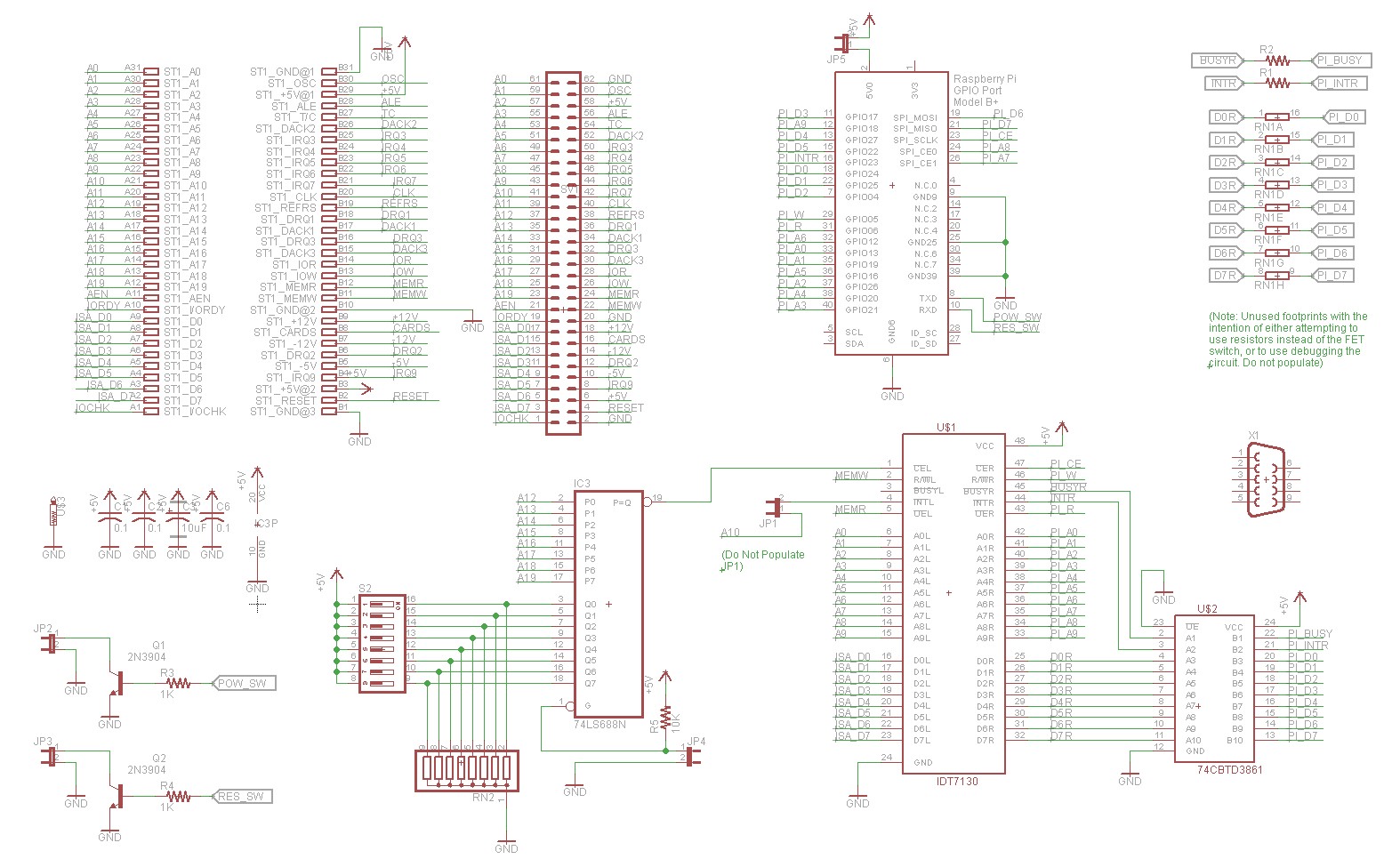 The first task is to get the dual ported RAM onto the ISA bus. Fortunately this is relatively simple. A 74HCT688 together with dip switches and pull down resistors forms the address decoding logic and provides a chip select to the left port of the IDT7130. The ISA bus’s data pins, address pins, and control pins (MEMR, MEMW) connect in the obvious way. It’s really no different interfacing this dual ported ram than it would be to interface a static RAM.

The second task is to interface the dual ported RAM onto the raspberry pi’s GPIO. For signals that are output from the pi and input to the ram (address, control lines), this is relatively simple as the pi’s 3.3V GPIO’s high logic level is sufficient to register as a logical high on the IDT7130.

Interfacing the data bus, however, is more difficult. The data bus has to be bidirectional. Pi-to-RAM transfers wouldn’t be a problem, but RAM-to-pi transfers would lead to 5V logic levels being sent to a 3.3V raspberry pi. I measured the logical high output of the IDT7130 at approximately 4.6V. This would be high enough to damage the pi’s GPIO interface. I chose to use a 74CBTD3861 FET bus switch to remedy this, a suggestion made by a helpful member over at vcfed. The 74CBTD3861 includes a dropping diode that is suitable for interfacing 3.3V logic. This is an SMD device, which is somewhat unfortunate as I try to avoid SMD devices in my retro builds, but fortunately it is a relatively large and easy to solder package.

The other feature I wanted was the ability to have a hardware reset, for those times when the PC is so thoroughly locked up that a software CTRL-ALT-DEL is insufficient. I used a 2N3904 to provide an open collector output. Running short on GPIO pins, I used the pi’s RXD line to drive this transistor. This is fine, as this line is also a GPIO, but has the disadvantage or (or advantage depending on how you look at it) of automatically being pulled high during the pi’s boot sequence.

I had the pcboards made at JLCPCB: 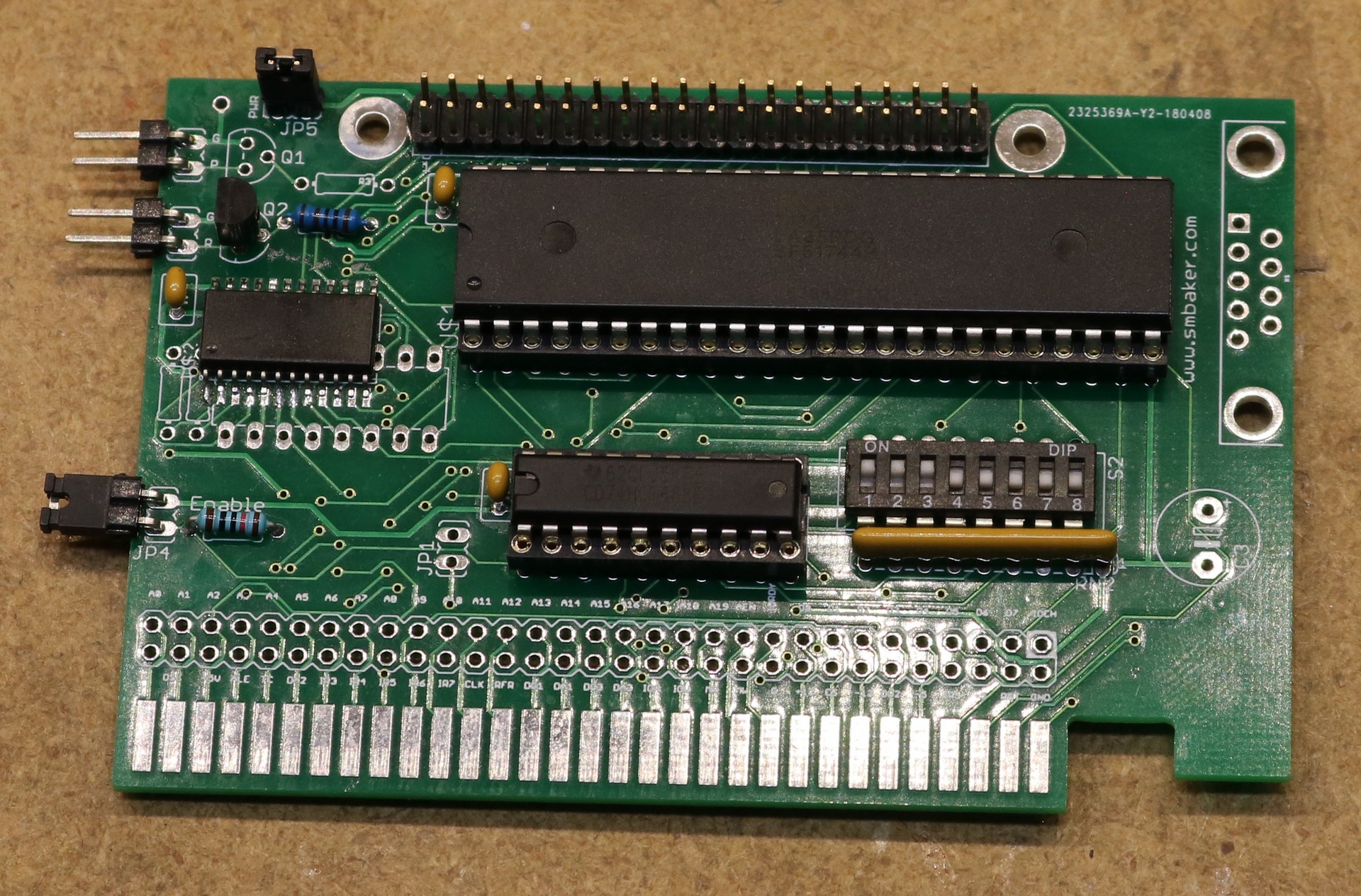 Here’s a picture with the raspberry pi mounted: 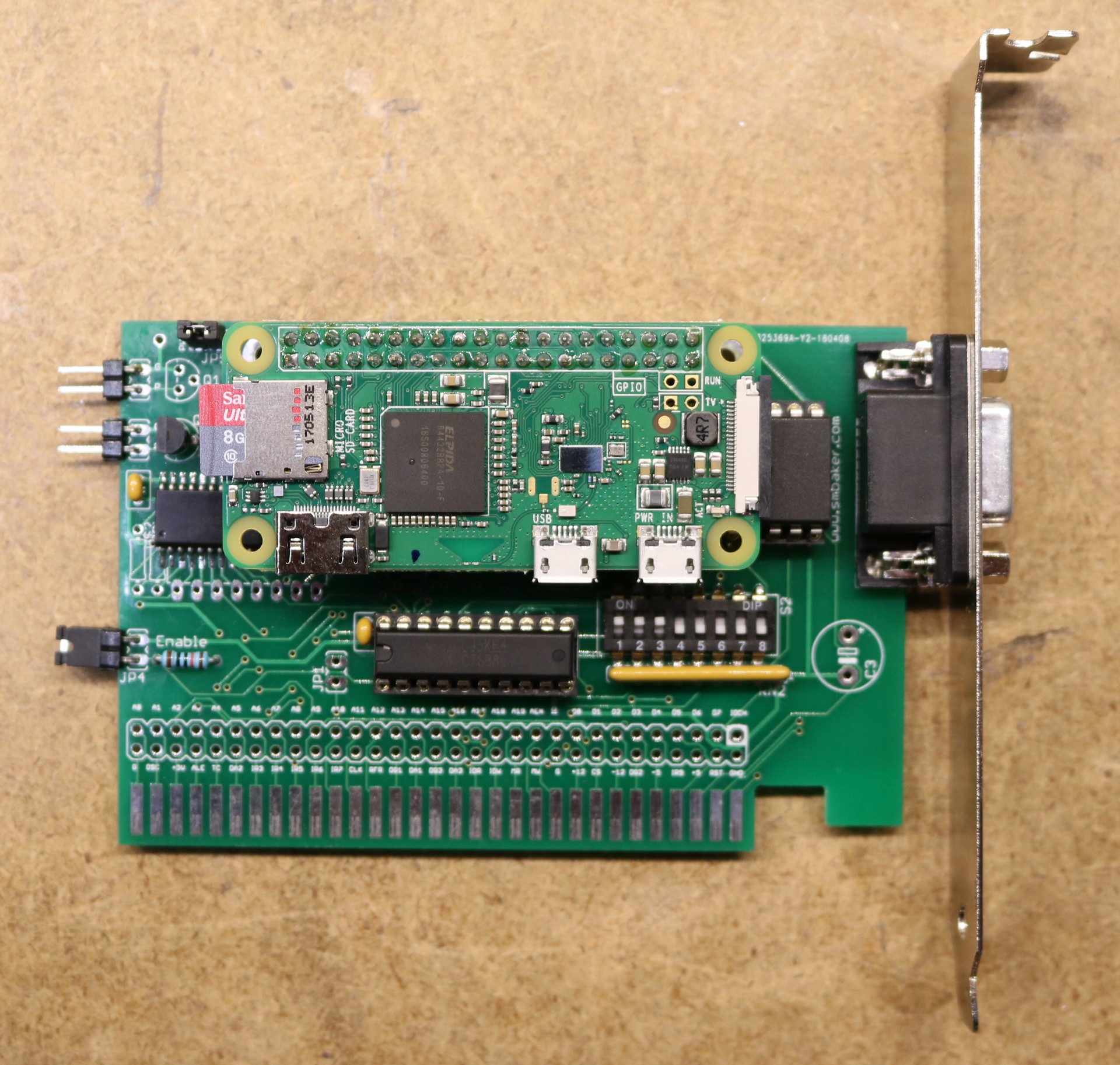 The DB9 connector is not actually connected electrically. It’s solely there to serve as a means to mount the metal bracket to the pcboard.

The software is available in my github repository at https://github.com/sbelectronics/pi-isa-drive

The software consists of two pieces:

Int 13h is the bios interrupt handler that is responsible for servicing floppy and hard drive IO requests. The operations are relatively straightforward (initialize controller, read sectors, write sectors, get disk parameters, etc). Normally this handler is implemented in the computer BIOS.

Second, the BIOS extension can be installed into the dual-ported RAM. This requires stripping it down to remove some of the frills such as printing informative messages to the console. It has to be made to fit into 512 bytes of memory. This does allow the computer to boot from the BIOS extension using the virtual floppy image from the pi. Since it isn’t run from the command line, there’s no additional RAM required, and it doesn’t need to TSR.

On the raspberry pi, we run a python program that continuously checks for new requests in the shared memory and services them. As the R_INTR pin on the dual ported RAM is connected to the pi, polling for requests is as simple as checking one GPIO to see if the interrupt has been triggered. Once a request is detected, we read the request parameters,  perform the necessary operations on the floppy image, and write the response back to the dual-ported RAM.

The python server makes use of a C extension to implement memory transfers through the GPIO efficiently.

The dual-port RAM is 1KB in size. We organize it into roughly the following parts:

The message boxes are a special feature on the dual-port RAM. There are two bytes, that if you write them, they will assert interrupts to their respective ports. I made use of the right-side interrupt so that the pi can detect a request by checking a single GPIO pin. I didn’t make use of the left-side port, as the PC is stuck waiting for the request anyway, it can simply sit there and poll for it until the request is serviced.

I wrote a benchmark in Turbo Pascal that sequentially writes 200 4KB blocks and then reads them back in. The measured performance is:

This is the revision 1 board is available on OSH Park.

I do have several of the HASL prototypes that I demonstrated in the video remaining and might consider selling them off to interested parties. I’m not knowledgeable on modern ecommerce or shipping of physical products, so I haven’t decided yet how I will do this, what it would cost, or even if I will be selling boards directly.

I am working on a revision two board that I expect to incorporate a few improvements. Nothing earth shattering, just a few minor tweaks and filling out a slightly larger board size. Revision two will probably mature enough that I’ll have it made in ENIG rather than HASL.