I got my new iPad 2 the other day, and am just starting to try out a few applications on it. This page will serve as a place to list applications that I find noteworthy and reviews of accessories, etc.

The first thing to talk about is the iPad 2 Smart Cover, which I find just doesn’t stay closed. Here’s a picture: 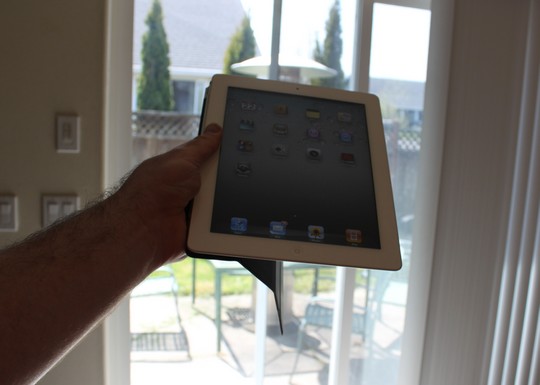 The smart cover is neat. It hooks up to the side with little magnets, I just don’t find that it works very well.

I have a fancy $630 ipad, why would I want to listen to crappy analog output from it? It’s the latest and greatest technology, however it has no toslink or sp/dif port.

What I do have is a HDMI out adapter that I can use with my HDTV. So, I think to myself…. HDMI has digital audio, all I need to do is get that digital audio into a format I can use, like toslink optical. Can’t be too hard, can it? So I google around and find a product that looks like it will do it, something called a “HDMI audio extractor”. It has HDMI in, toslink out. There’s also some other outputs, including analog out and a passthrough HDMI output. Surely, this ought to do it? Well, no. Turns out it only works in a passthrough configuration. If I don’t hook a TV up to the HDMI output on the HDMI audio extractor, then nothing will come out of the optical output.

Looking around for other options, I see a couple of other devices, mainly docks, that will output digital audio. They range from fairly cheap to really expensive. A bunch of other forum threads talk about using the camera adapter with a USB audio adapter. Yuck, that doesn’t sound pleasant.

Finally, I stumble on something called “airplay”. It seems the ipad is able to stream it’s sound output to a device called an “airport express”. I’m not sure why this was so hard to figure out, but it was fairly nonobvious to me. As an added benefit, it will also be a wireless solution.

So I decide the way to go here is to use an Airport Express. The airport express is this contraption that looks like a fat wall-wart with an ethernet port, usb port, and 1/8 audio jack in the side of it. Supposedly, the 1/8 audio jack is a fancy combination analog-digital jack with a little laser sitting behind it that will output my optical digital output. I order a couple of mini-optical to toslink cables.

The laptop is more productive, “airport utility” finds it’s device and warns me that it’s going to mess with my network settings to configure it. I figure… what’s the worst that can happen? Well, it manages to corrupt the laptop’s network settings in some incomprehensible way. I spend about 30 minutes repeatedly trying to re-enter network keys and whatnot before finally giving up, deleting my wireless and re-adding it.

Then it says it found a firmware update (gee! that’s easier once I fix the laptop so it can talk to the internet). So I figure, sure, I want my airport express to be the best airport express it can be, so I update the firmware. It changes the airport express’ IP address to 169.254.171.162. I have no idea where this address came from, it’s not on my subnet, not reachable from my subnet, and not something I ever typed. I change it back to the static IP I wanted (once again, airport utility decides that in order to update the airport express, it must corrupt the laptop’s network settings). Delete/re-add network connection. Surprise, the IP is still set to 169.254.171.162 (I’d still like to know where this is). I give up and just turn the frickin’ thing back to DHCP. Apparently the new firmware must not be up to the task of something so fancy as a static IP address.

I decide that “base station 6b66b” is probably not my favorite name, so I give it a better name, like “Airport Office”. This once again causes airport utility to damage the network settings on the laptop. Delete/re-add network. Now my airport express has a reasonable name. Apparently changing any setting on the airport express also requires airport utility to do some unspeakable act of perversion to the laptop’s network settings.

Anyhow, *FINALLY*, we grab the ipad and magically a dropbox has appeared next to the volume control, giving me a choice of speaker selection of “iPad” or “Airport Office”. Success. I plug the Airport Express into my minidigi/miniamp using the toslink and mini-optical adapter and at long last, we have digital output from the ipad to a digital amplifier. Kind of a long way getting here, but it’s done.

The sirius/XM player also plays through airplay (just set the speakers via the ipod app first). Even other programs, such as games, are sending their audio to the airport express. I haven’t verified if this is true of all apps.

Complaining about the iPad Sirius/XM app

The app sounds good, but have a number of problems that should be simple to fix but haven’t.

These aren’t big things to fix, a lot of it can be done by just making the app a little more robust and auto-reconnecting on errors. Check the reviews of this app in the appstore and people absolutely hate it due to the reliability issues. You’d think sirius/xm would have the resources to make it right.

I ended up giving up on the Sirius/XM iPad app entirely. It’s just not reliable and the inactivity timeout is a total pain in the butt. So, what I did instead was to use a program called ‘airfoil’ with my own xmicroplayer software. Xmicroplayer can run for days or weeks without experiencing a hiccup. I have an existing Linux box that I run various virtual machines on with VMWare, so it was easy to run yet another VM, this time running Windows XP and install airfoil + xmicroplayer in it. The plus is that this consumes no additional resources around the house; the VM server was running all the time anyway. One complication was that airfoil was a bit perspective about connecting from inside the XP VM — for some reason I had to create the VM under VMWare on my Windows box, suspend the machine, copy it over to VMWare on the Linux box, and then restart it. If the XP VM was rebooted on the Linux box, then airfoil would start throwing firewall errors. As long as I keep a powered-on checkpoint set, it’s easy to restart the VM in the state where it’s working. I suspect there’s something interesting going on here, but I lack the desire to look into it further, as now it’s working, convenient (Sirius/XM always on and playing), and extremely stable.

I’m even thinking about getting a couple more Airport Expresses and installing them on speakers in other locations. Supposedly airfoil can stream to many things at the same time.