I love my Chumby linux-enabled alarm clock, but I don’t love how bright the dang thing is in my bedroom in the middle of the night. It could double as a very effective (but very unwanted) flashlight. The Chumby has a night-mode, but it is generally enabled by using a fixed time. That would be great if I went to bed and got up at the same time each day, but I don’t.

So, what I really wanted was a Chumby with an ambient light sensor. So…. I set out to make one: 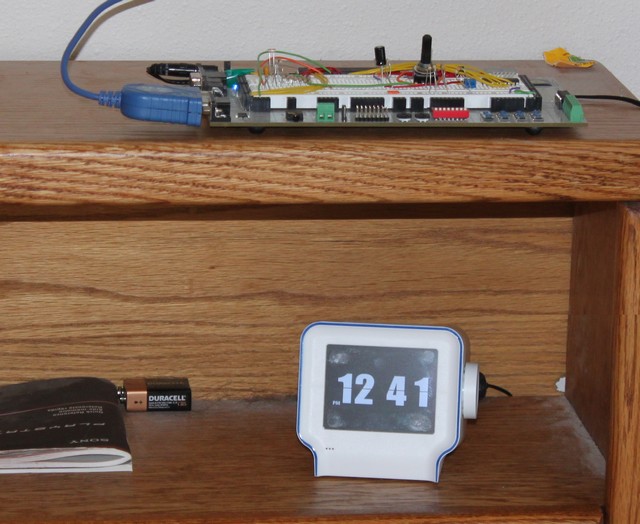 Yes, using a propeller professional development board is a little overkill for the project, but it’s what I had on hand and will suffice until I can make something a little smaller.

I placed the script in /mnt/storage/dimmer.sh on the chumby and started it with:

There are ways to automate execution of the script on startup and I’ll probably do that. In the meantime, my chumby is battery-backed-up during outages, so it’ll never get rebooted anyway.

A video of the hack in action:

A short follow up… In my tinkering I was also able to use the PDB’s on-board serial-usb converter by using pins 30 and 31 for tx/rx. These are the same pins used by the programming interface. It also works fine using a prop-plug for serial-USB conversion. So, one could probably implement this with as few components as:

Everything needed to do it except the photocell is in the propeller education kit… I might try to prototype it on the PEK, just to show the minimalist approach. The photocell actually used to be in the PEK, but was removed due to ROHS restrictions. Nevertheless I got mine before then. I guess I like to live dangerously.

The USB Proto-Board is a great deal, and only costs $25 – $30 depending on quantity. It already has almost all of the components we need, including the propeller microcontroller, usb to serial, voltage regulators, etc. The only components needed to be added are the photocell and 0.1uf capacitor. Here is a picture of the circuit prototyped out on the proto-board: 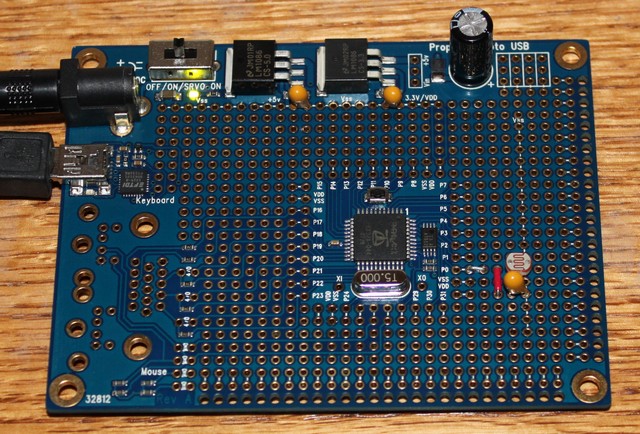 The remaining thing that needs to be done is to turn off the annoying blinky light on the USB-Serial. The proto-board uses an FTDI FT232R chip, and FTDI produces a tool called ft_prog that can be used to reconfigure the lights. I set the output for C1 to CBitBangI/O and that appeared to turn off the LED. You don’t need to mess with C0, as that LED is only used when data is received by the prop, which only happens (in our case) during programming.

Using the USB proto-board, we have a nice little implementation of the circuit.