In order to test the concept, and make sure I liked the engine, I purchased a used engine and tranny from a junk yard for $150 ($100 for the engine, $50 for the tranny). The engine came complete with carb, intake, exhaust, coils, etc.

The engine what I chose was the carbureted mazda 12A.

The idea behind the junk engine was to get something I could experiment with, rob parts off of, and eventually use as a core I could give to a rebuilder in exchange for a decent engine. I didn’t really expect it to run, but it was worth a shot…

The transmission itself isn’t necessary for the sandrail as the sandrail will continue to use it’s existing VW transaxle. However, the mazda started mounts to the tranny, so in order to get a running standalone engine, the tranny was necessary.

Here are a few pictures of the engine. I did all of the experimenting with the engine sitting on top of my welding cart (probably the only rotary-powered welding cart in existance!) 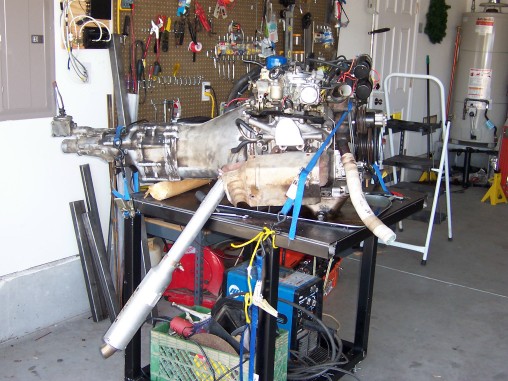 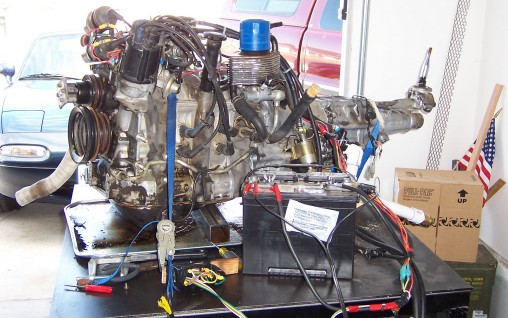 As pulled from the junk yard, the engine had a great deal of rust. The throttle plate in the carb was rusted shut, requiring a good soak in WD40 and a bit work working back and forth with a pliers. The carb was full of a white compound (aluminum oxide maybe?) which required disassembly and cleaning of all internal carb passages.

The engine itself was locked in place and wouldn’t crank. Rotaries suffer from a condition known as “carbon lock” where chunks of carbon can jam the apex seals in the rotor. However, I don’t think that’s what happened here — given the amount of rust in the carb, I think some water got into the engine and locked things in place.

I purchased some “SeaFoam” from the local auto stored (other places on the Internet recommend AmSoil Power Foam, but nobody stocks that in town, so SeaFoam was the best I could find). I let it soak for about 10 minutes, and then went to work on the flywheel. A couple of quick taps with a hammer and screwdriver on one side of the flywheel, and a couple of quick taps on the other and slowly I’d get more and more rotation until eventually the engine would turn freely.

After this, I hooked up the starter and cranked the engine (with plugs removed) while dumping WD40 in the intake while the engine belched out a mixture of WD40 and reddish gunk (rust?) out of the exhaust ports. (Note: I’m not sure I’d recommend doing this to anything other than a “junk” engine!).

The next step was to get the ignition and fuel systems working correctly.

The ignition system for the 12A with igniters is fairly simple if you have a wiring diagram available. Basically, there are two igniters mounted to the distributor. The igniters function much like points. The “B” terminal on the igniter goes to battery, and the “C” terminal goes to a coil. The other side of the coil goes to battery.

The stock carb has a lot of emissions contraptions hooked to it — I took most of them off and through them away. Once you get all that stripped off, the carb is fairly simple. There is a fuel-inlet (large tube) and a fuel-outlet (small tube). The outlet has a restrictor in the host that is needed to maintain proper pressure, so make sure to remember that.Just connect an electric fuel pump to the inlet and run the outlet back to your gas can.

So now it was time to start. I strapped the engine down to my welding cart with some ratchet-straps (didn’t want it to come flopping off the cart if it were to start).

I plugged any of the vacuum hoses that were remaining (there’s still a lot of them even with the emissions stuff removed) and started cranking. The engine wouldn’t run — ended up tracking this problem back to the crankcase breather tube, which I had mistakingly blocked off. The engine apparently won’t run if you block off the crankcase ventilation.

Once that was fixed, the engine took off with no problem at all! I hooked a garden hose up to the heater hoses and let the engine run for a while! I have to admit, I didn’t expect a $100 junk yard engine to run at all, it was quite a surprise!