The first step was to make a paper template of the shape of the old panel. Below is a picture of the template, with some pen markings showing where I intended to put the new gauges:

The next step was to trace the template onto the aluminum and cut out the shape with a hacksaw. I used some 5″ x 1/4″ aluminum flat stock. After cutting with a hacksaw, it took some fine-tuning with a file and sandpaper. I didn’t take pictures of the process of marking it or cutting it, but here is a picture of the final cut product:

The next step is to drill pilot holes where all of the gauges will go. I again taped the template to the aluminum. This time, I used a center punch to punch a little spot in the center of each gauge. After punching, I run a 1/8″ drillbit at each of the punch marks. Finally, I used a marker to mark what each hole was for (after all, you don’t want to forget and holesaw something to the wrong size). Here is the pilot-drilled instrument panel.

Okay. Now we’ve got pilot holes drilled for each of the gauge and switch locations. Now it’s time to get out the hole saw. A 2″ hole saw will take care of all the smaller gauges. The actual dimension is 2 1/16″, but 2″ plus a little bit of filing will make it work. The speedometer hole was a little more work. I measured the size of the speedometer to 4 1/4″. At the local hardware store, a 4 1/4″ hole saw was about $20 bucks, and the cheap guy that I am, I decided to use a 4″ holesaw from my $2.50 harbour freight “big holesaw” set. It did the job, but took about and hours worth of filing to get the hole up to the final dimension.

The smaller holes for the switches and lights are most easily drilled with a step drill. A step drill is a drill bit that starts out at a small size, and “steps” to bigger sizes. Ask for one at the hardware store and they’ll know eactly what you want. Step drills make drilling the smaller holes to exactly the right size very simple.

Unforuntately, this was the point at which I stopped taking pictures. So…. It’s time for the final product: 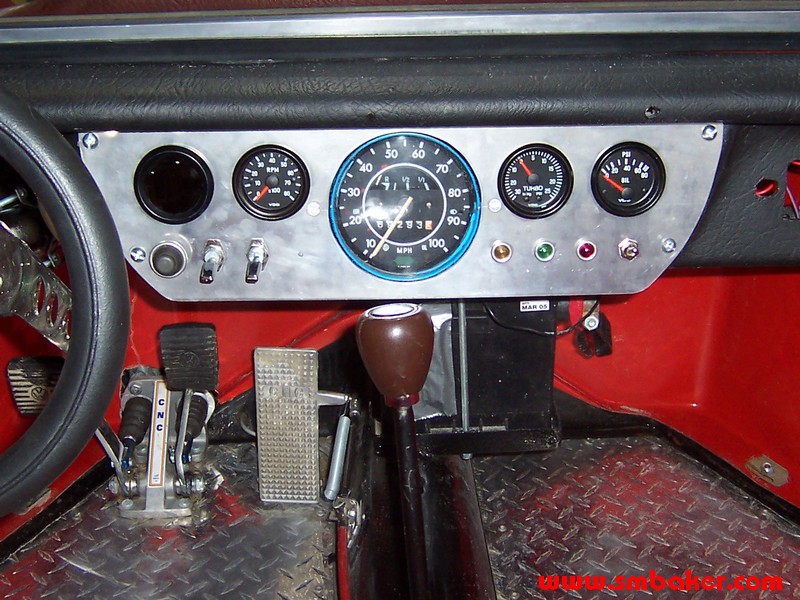 The gauges (from left to right) are air/fuel ratio, tach, speedo, turbo boost, and oil pressure. The pushbutton is for start and the toggles are ignition and lights. There’s one blank spot for an additional toggle. The warning lights are alt, turbo-oil, and engine-oil. The little toggle below the oil pressure gauge switches it between engine oil and turbo oil.

The reason for the “turbo oil” light and switch is because I have a restrictor in the oil line to the turbo charger that restricts oil pressure down to about 5-20 psi depending on engine pressure. The extra light is some insurance that the restrictor doesn’t get plugged.