In this blog entry, I describe a constant-current LM2576 power supply. Below is a picture of the supply, mounted into a section of aluminum square tubing. 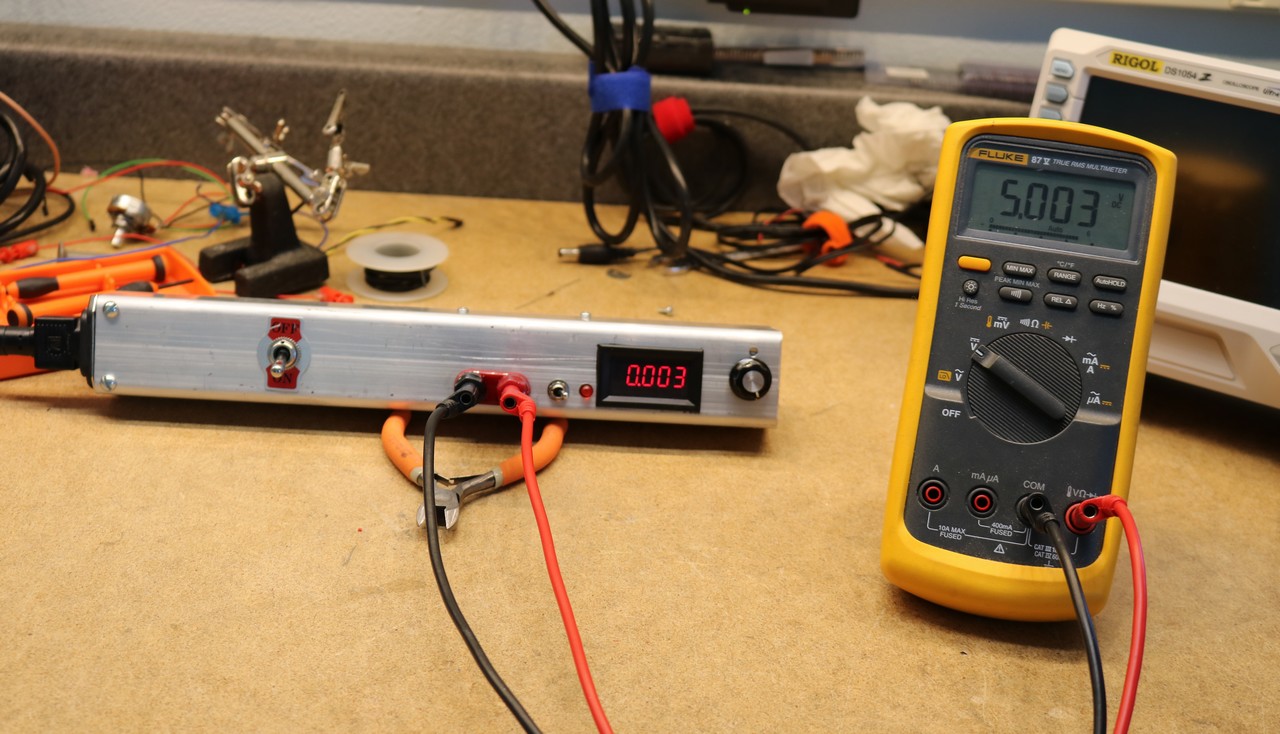 I already have a nice commercial power supply on my bench, but whenever I need some additional power, such as 5V DV, I end up grabbing a wall wart. While the wall warts work, 1) their longevity isn’t great (several have failed on me), 2) there’s no meter to show current consumption, and 3) there’s no current limiter to keep me from accidentally frying a project if something goes wrong. I decided to finally build my owned fixed power supplies for the bench.

My key criteria were:

I’m a fan of the LM2576 switching regulator, so I decided to give that a shot rather than building one of the more traditional LM317 designs.

Let’s start by taking a look at the circuit. The following is my hand-drawn schematic on a whiteboard from the youtube video I made of the supply: 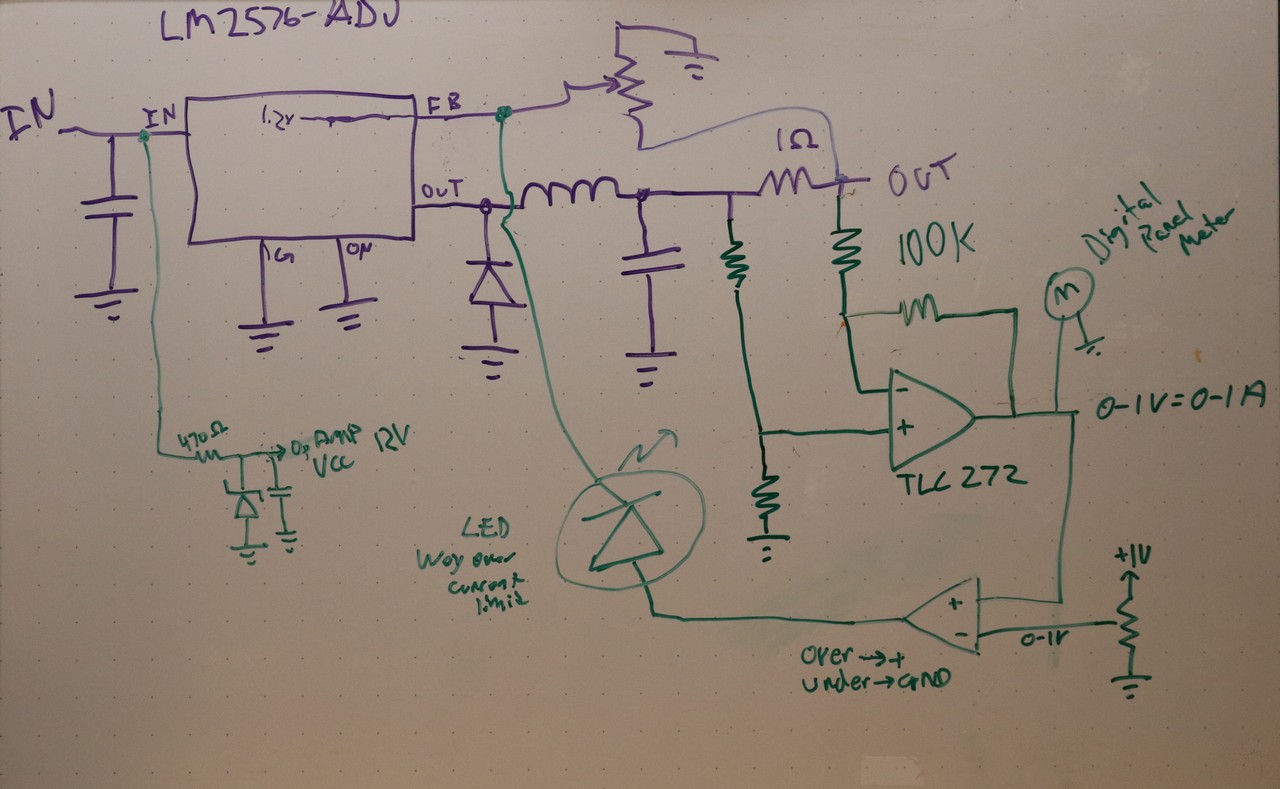 Starting at the top-left, we have the LM2576-adj regulator. They make several versions: LM2576-5, LM2576-12, LM2576-ADJ, etc. If you examine the differences in the datasheet, you’ll see that the fixed voltage (-5, -12, etc) regulators include a built-in voltage divider whereas the -ADJ version you supply your own voltage divider. The potentiometer top-center in the schematic will serve as our voltage divider. Although I’m building a fixed 5V supply, we’ll see that having the voltage divider external comes in handy when we go to add the current limiting feature. In my reference build, I used a board-mounted 10-turn pot.

On the output pin of the LM2576 there is a diode, inductor, and capacitor. Those are boilerplate, right out of the datasheet. I used a 100 uH inductor and a 1n5822 diode. The output capacitor can be sized according to your needs. I currently have a 220uF 16V installed.

To the right of the output capacitor is a 1 ohm resistor. That is our “sense resistor”. From ohms law, 1 amp over 1 ohm = 1 volt. We can take a voltage reading from the the points at the left and right of the sense resistor. The voltage measured will be equal to the current that is flowing out of the supply. The sense resistor should be a precision resistor (1% tolerance) for accurate reading. In my projects, I’ve been using a trick I learned from eevblog — instead of using a single high-wattage 1% resistor, I generally parallel ten 10 ohm resistors. I have a big bag of precision 10 ohm resistors for just this purpose.

Bottom-right is a second op-amp (the TLC272 includes two op-amps per chip, so this works out great). This op-amp takes the 0-1 V current sense signal from the first op-amp as well as a 0 – 1V current limit signal from a potentiometer. This is our current limit control. In this configuration, the op-amp will act as a comparator. If the sensed current is greater than the set current, the op-amp’s output will rise to the op-amps Vcc. If the sense current is less than the set current, then the op-amp’s output will drop to GND.

This output goes through a diode where it goes directly to the feedback pin of the LM2576. This is where the LM2576-ADJ turns out to be much handier than the LM2576-5 or LM2576-12. We have direct access to the feedback pin, and if we jam a signal thats greater than 1.2V into that pin, then we can cause the regulator to reduce its output. That’s exactly how the current limiter is able to control the regulator.

On the bottom-left of the schematic is a zener shunt regulator that is used to supply the power for the op-amp and the reference for the current limit pot. It works best to have a steady voltage source for these. It only takes a small amount of current, so a zener regulator was perfect. 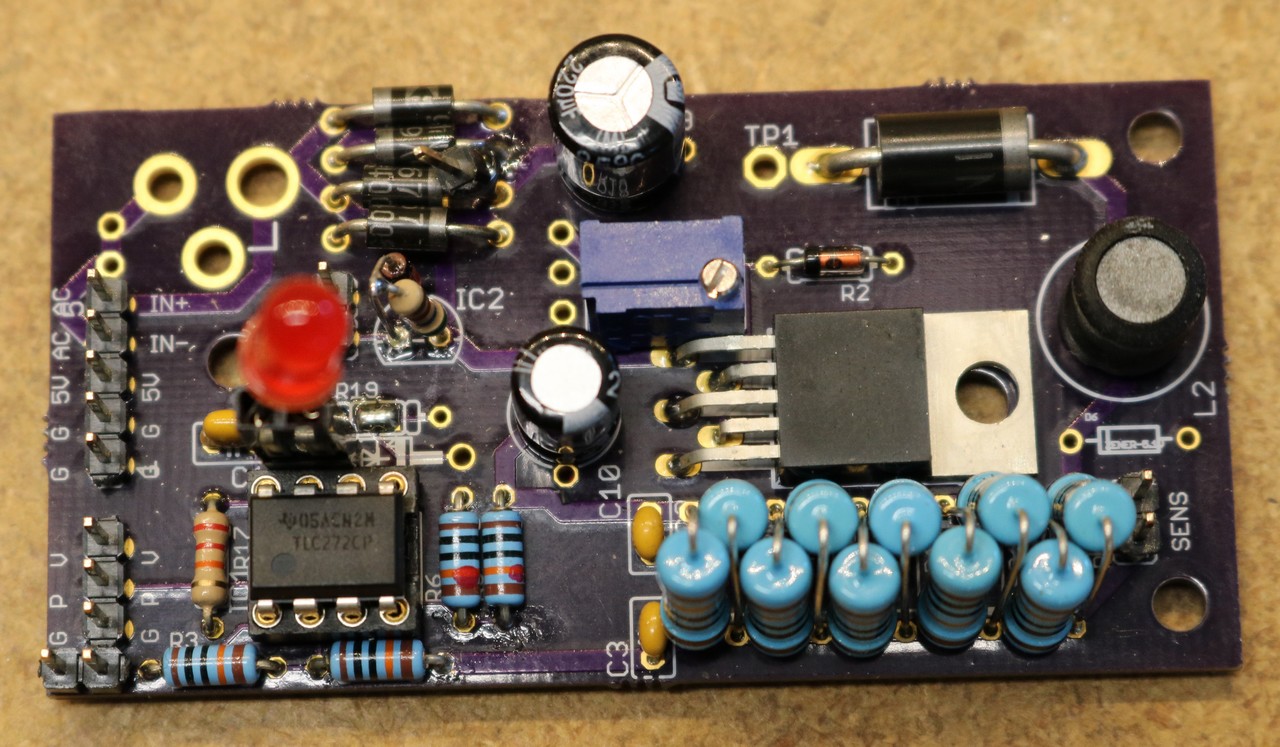 There’s a few more features on the PCB — for example I added some diodes so I can feed it directly from AC.

I went low-tech on making a case and just purchased some 1.75″ square tubing from the local metal supply store.  It cost me twelve bucks for a 3′ piece. I only needed a foot, so I have lots of aluminum to spare for other projects.

UPDATE: Several people have asked for an updated schematic, so here is one: 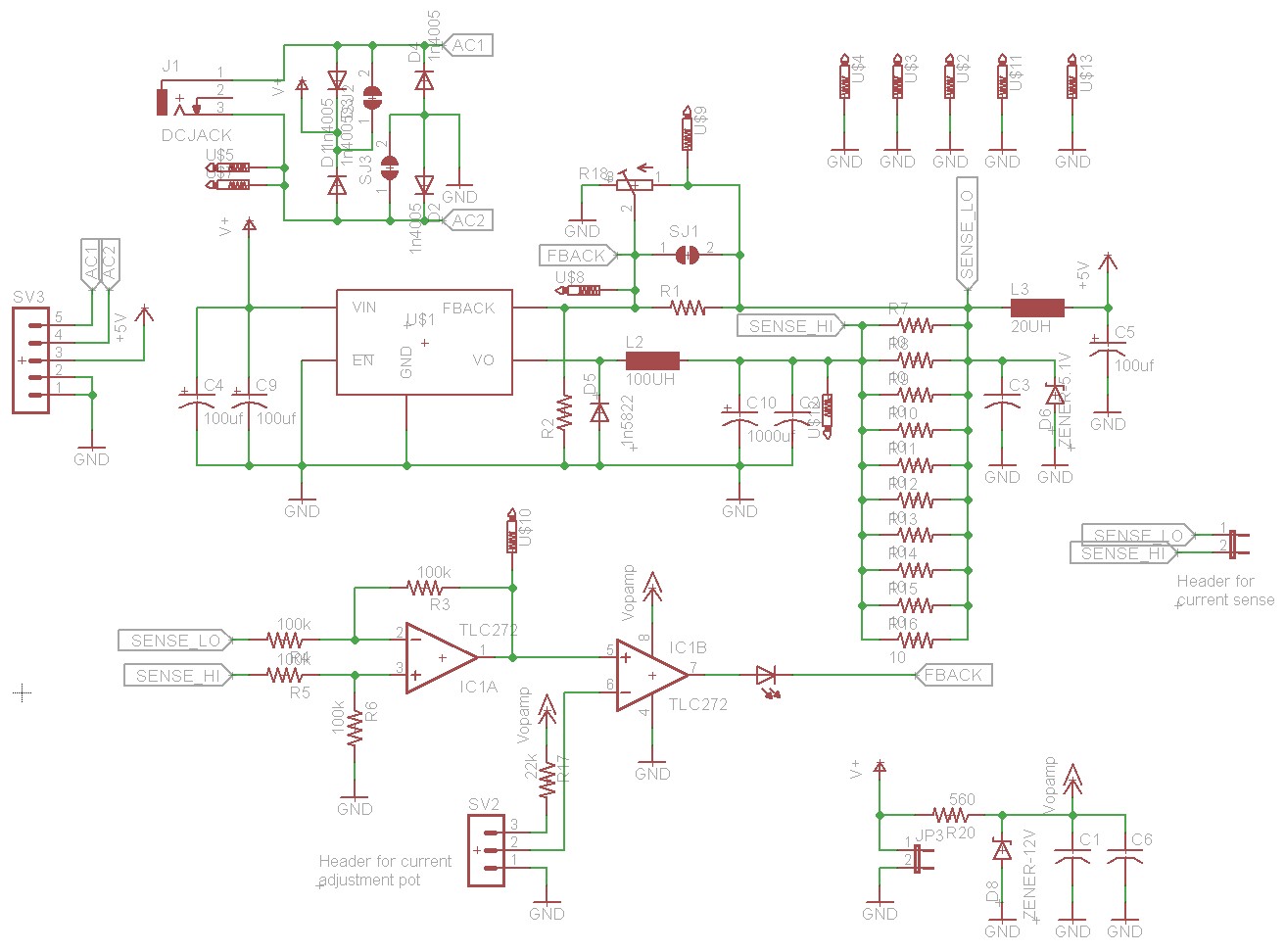 I haven’t had a chance to clean up the above for publishing yet. Here’s a few important notes and corrections: