VW transaxles were never intended to mate with Mazda engines, so an adapter kit is a necessity. The basic adapter kit consists of an adapter plate and a modified VW flywheel. Also recommended is a new clutch to replace the stock VW clutch. 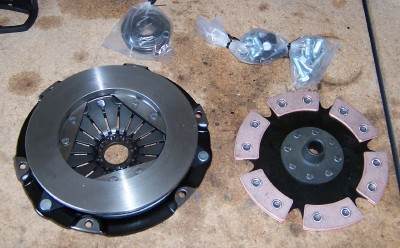 One thing that’s not included (nor did anyone mention it to me) is a heavy duty throwout bearing cross arm. These are recommended when you install a heavy duty pressure plate. The stock cross arm is notoriously weak (mine broke about a year after the engine swap). It’s a lot more conenient to change out the part now when you’ve got the engine off, than to pull everything apart when it breaks later on. Your local bugpack distributor should have them. I see the Chirco mail-order website also has them listed for sale.