This page describes how to upgrade the stock leading ignition on your Mazda Rotary Engine to a direct-fire MSD 6A ignition.

Note: Please do not plagiarize this page! You are welcome to place a link to this page from your site, but please do not copy the contents (or pictures) from this site to your website without our express written permission (contact: sandrail@smbaker.com).

The direct fire MSD ignition was (to the best of my knowledge) first proposed by Paul Yaw at www.yawpower.com

First of all — why do you want to do this? Well, I have to admit, I did it mostly because I feel a need to tinker with things, and can’t leave any stock part alone. Seriously though, the MSD 6A box claims that you will get “less plug fouling”, “better performance”, “quicker throttle response”, and “easier starting”. Let’s hope all of that is true.

By performing this conversion, we’re getting two bonuses:

Here’s what you’re going to need to buy:

Making an adapter plug out of an old ignitor

[Note: You don’t have to do it this way — there are other ways to connect the MSD to the pickup, such as fashioning your own plug, or cutting the pickup wires inside the distributor and attaching your own connector — but I think this is the cleanest way to do it]

Here is a picture of an ignitor, so you can see what I’m talking about:

As you can imagine, that little two-pin plug in the side of the distributor is not the easiest thing in the world to find a connector for. However, if you’re lucky enough to find an old ignitor, then you have the perfect connector!

First thing to do is to cut open your ignitor and remove the guts. I cut mine open with a sherline milling machine (a very useful tool!). You could also probably cut one open with a small cutting wheel on a dremel. Be careful to not cut too deeply — all we need to cut through is a relatively thin metal cover on the ignitor.

As a side note, I painted my adapter “bright blue” (see pictures below) to ensure that it never gets confused with a “real” ignitor.

Wiring Step #1: Connecting the MSD to the magnetic pickup in the distributor

Here is a picture of the distributor. The leading ignitor is shown in bright blue. You can see the little red and green wires going from the magnetic pickup to the ignitor. 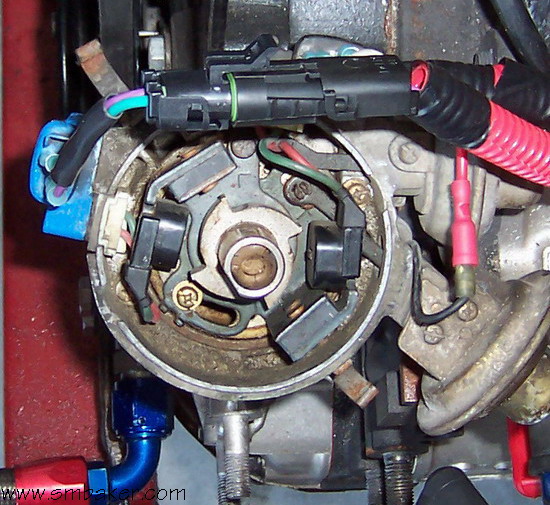 Remove the leading ignitor from the distributor. It is held on with two screws. This will leave you with a little plug on the side of the distributor. There are a couple of choices about how to connect to this plug:

Okay, let’s assume you decided which of those three alternatives you want to do. Now, it’s time to connect the MSD ignition to the leading ignitor. We need to wire it as follows:

This is very important — get the connections right! If you wire it backwards, the ignitor will fire at the wrong time.

Wiring Step #2: Connect the MSD to your coils

Recall that we’re going to connect two coils, in parallel to fire the leading spark plugs. 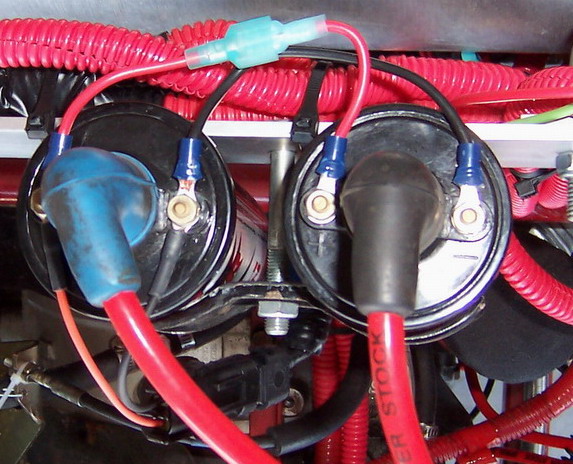 Wiring step #3: The big red and the big black wires

The MSD has a big red and big black that need to be connected to (unsiwtched) power and ground, respectively. There’s not much to say about this — just ensure that you do pick good places to hook them to. If you connect the gound to the chasis, make sure it’s a good spot on the chasis.

And then we have that one leftover little white wire. You can safely cut it off and cap it — it’s for points, which we don’t have. Alternatively, you can install a small hidden switch to between the white wire and ground, and use it has a hidden kill-switch / theft-deterrent switch.

There’s a couple of choices about where you connect your tach. You can connect it to either of these:

I prefer connecting it to the “-” terminal of trailing coil. The reason for this is simple. If the trailing ignitor fails, then your tach will fail, thus alerting you to the problem. As the trailing ignition really doesn’t do that much work, it isn’t that noticible should it fail. Hence this is a good way to tell. (If, on the other hand, the leading ignition fails, then you will most certainly be aware of it…)

Alternatively, you can connect it to the tach output on the MSD ignition. On my OffRoad MSD, this is a solitary green wire. On the other MSD versions, I think there is a plug in the side of the ignition — check your manual.

The one place that you should probably NOT connect it is to the “-” terminal of the leading coils.

Here’s a final view of the whole ignition system, as installed on my sandrail:

Above, you can see the MSD-6 OffRoad igntion unit, as well as two blaster-2 off road coils, and one stock coil.

Below is a side view, showing the routing of the spark plug wires. 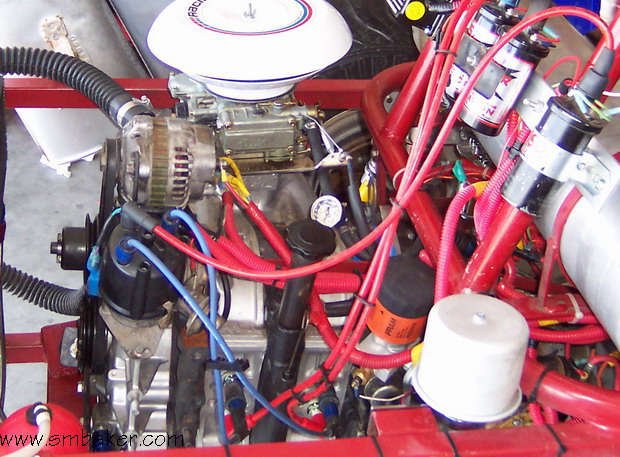