I started a project to build a self-balancing 2 wheel robot today, based largely on Hanno’s Propeller-based dancebot from the new propeller book. The first step was sourcing sensors, and the first sensor I decided to work on was the accelerometer, the LIS3LV02DQ.

This accelerometer is a 3-axis using and can communicate digitally via I2C or SPI. It can be interfaced to the prop with no external components (well a couple of bypass caps are usually a good idea) which make it pretty easy. It’s cheap, about $10/chip from newark. The problem is…. it’s a 28-pin QFN surface mount package, and I’m not a surface-mount person. The QFN package does not have pins; it just pads underneath the chip. This makes it a little more troublesome to hand-solder than some of the other SMT devices that do have pins.

So, it seems like the appropriate time to dive into surface mount work. I started by getting a hot air gun, an Aoyue 852A++ rework station for sra-solder.com. It cost $139 plus shipping, which came to just over a hundred and fifty bucks shipped. Seems like a bargain. The hot air station is chinese made, but the brand has good reviews on amazon and elsewhere. It features digital controls and also sports a built-in vacuum pickup tool. Here’s a picture of the rework station: 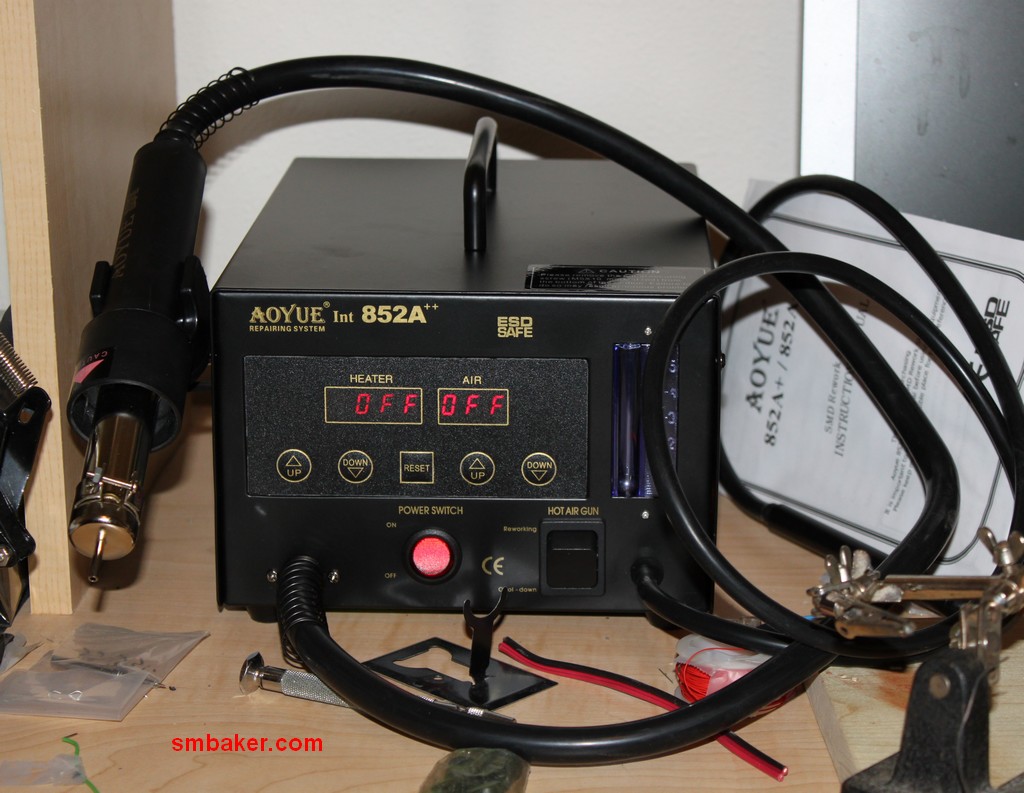 Above is a picture of the station sitting on my very cluttered workbench. There’s two toggle switches. One is a master on/off and the other switches between hot air and cooldown modes. The buttons are used to adjust temperature.

In order to breadboard the accelerometer, I got some QFN28-to-DIP adapter boards from Proto Advantage. These are little circuit boards with the QFN28 pattern on the top and a DIP pattern for standard 0.100 headers on the bottom.

I started by applying some solder to the pads on the board. Cleaned it up a little bit to make sure that I didn’t bridge any of the traces. Applied some flux to the board. Set the QFN28 chip on the board using some tweezers and aligned the pins as well as my eyesight permitted.

After that, I fired up the hot air station to 400 degrees with an air setting of about 12. Start swirling around the chip with the hot air until you notice the solder start to melt and flow. Shut down the hot air and let everything cool. It’s as simple as that. I didn’t record the time, but I’d say it took under 30 seconds to do the job.

To finish off the Proto-Advantage board, you have to solder the 0.100 headers on the back side. If I’d had some solder paste I think this would have also been a near-instant process. However, all I had on hand was my usual rosin-core throughhole solder, so I hand-soldered the 0.100 headers with my xytronic iron. Here is a picture of the finished product: 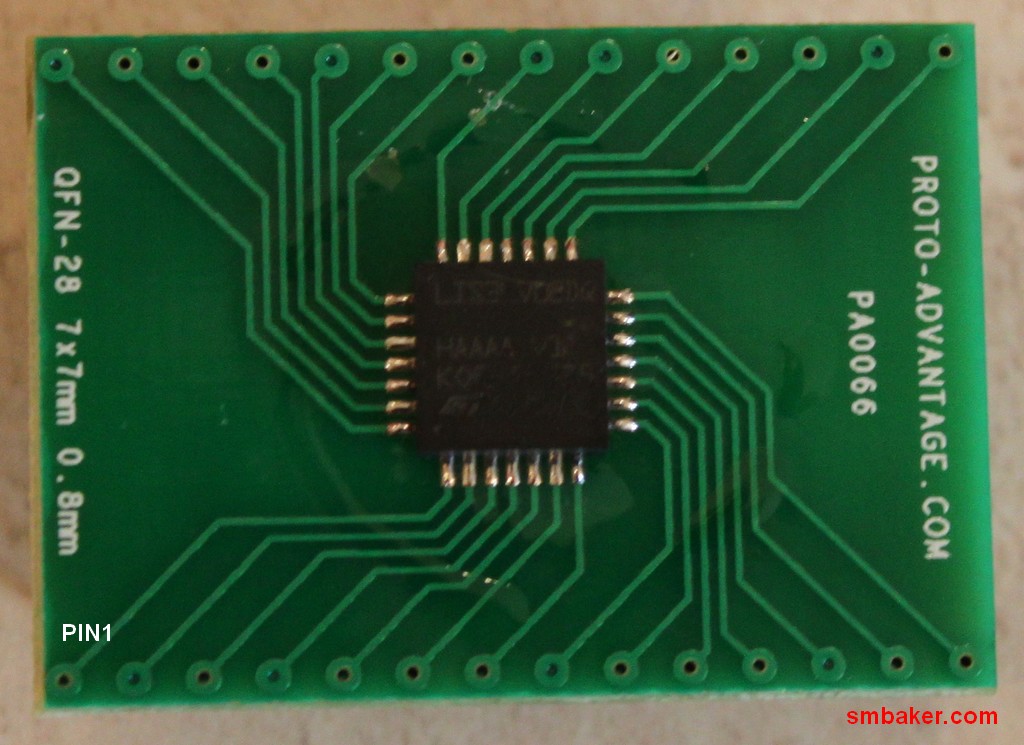 Although it kind looks like there are pins in the picture, looks are deceiving. The proto-advantage board has extra-long pads (probably to allow hand-soldering with a regular iron), and you’re seeing the excess solder the flowed out from under the chip back onto the pad. If I’d have used a stencil and solder paste, there probably would have been a lot less excess. 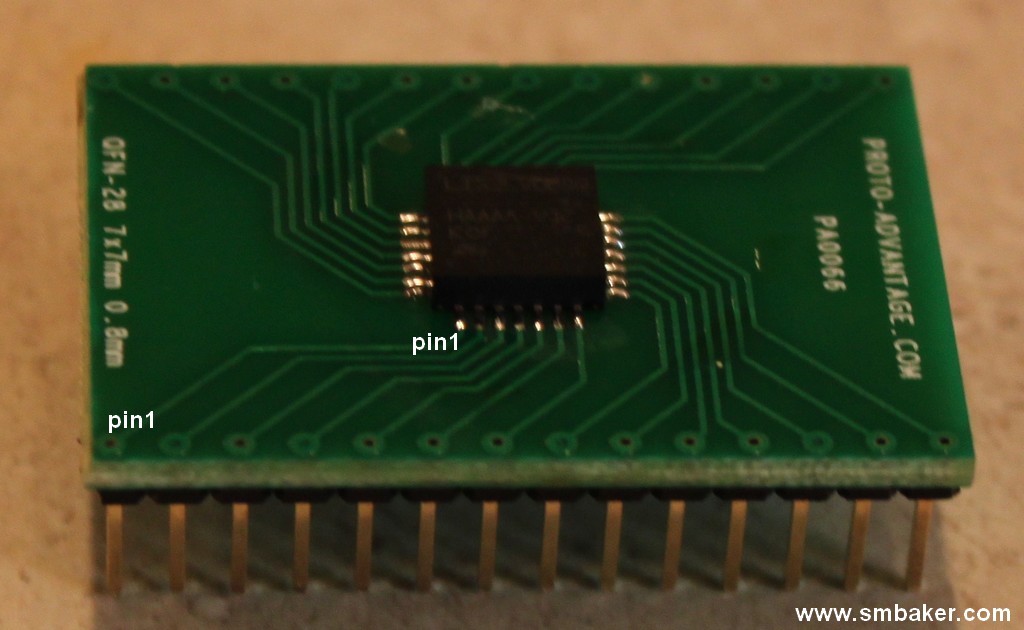 As you may notice, I soldered the chip about 180 degrees rotated from how I probably should have soldered it (the proto-advantage text is upside-down if you orient the adapter with pin1 toward the top). Fortunately, it doesn’t really matter. I’ll just mark pin1 on the adapter with a white dot or some such thing. If that’s the biggest mistake I made on my first SMT attempt, then I’ll be happy.

The next step was to put this thing on the propeller proto-board and see how it works: 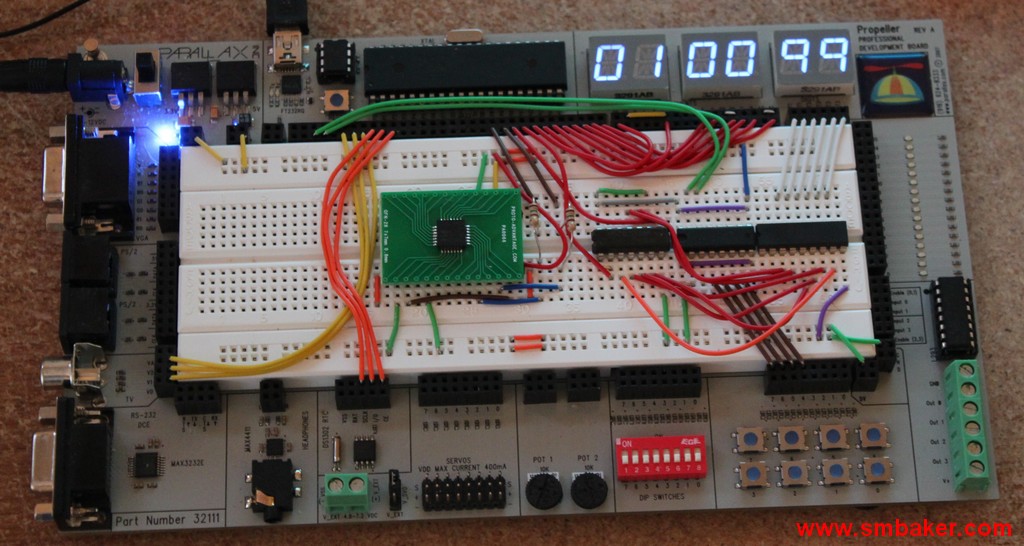 I have the three LED displays showing the acceleration on the X, Y, and Z axis respectively. The Z axis points straight up. The X axis runs from the bottom to the top of the proto-board, and the Y axis runs from the left to the right of the proto board. Although it’s indicating 99 (9.9G) on the Z axis, it’s actually measuring 1.0G; I capped it at 9.9 to fit the measurements on the 2-digit display. The X axis is reading 0.1G, probably indicating my computer table is not level. As you tilt the board, the numbers change in the predictable way.

Well that’s it for this post; my SMT attempt was a success. The Aoyue 852A++ hot air station was very easy to use, and I’d recommend it to anyone looking to experiment with SMT work.